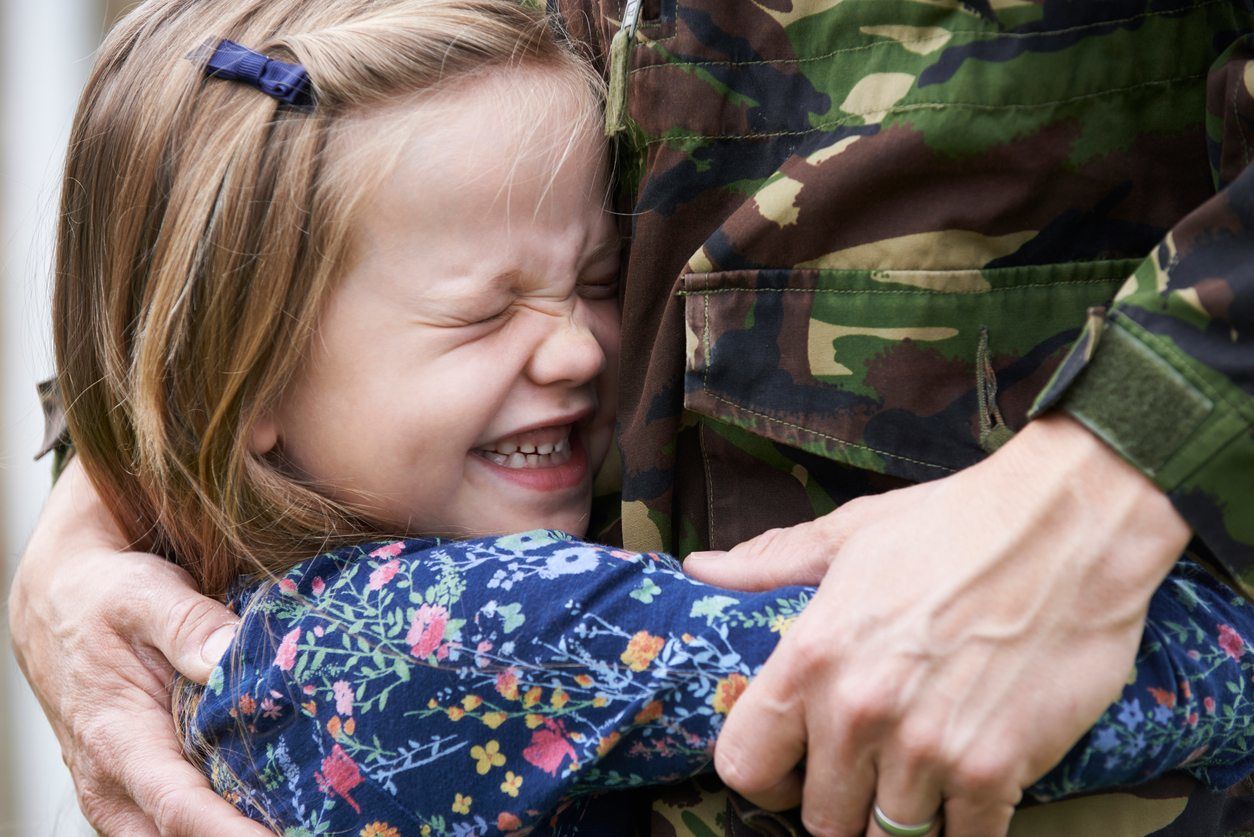 Serving in the military poses significant problems for married couples when a spouse is deployed and they cannot control orders that require frequent relocations. When you are divorced, the problems can expand, especially when your ex-spouse is unsupportive of your service and orders take you away from your children. If your former spouse is hostile and might attempt to interfere with your ability to maintain continued contact with your child, it is important to understand risks.

A case involving a Marine stationed in North Carolina and his ex-wife in Pocatello, Idaho, demonstrates the risk.

The Marine and his wife had a son in 2003 when he was stationed in Klamath Falls, Oregon. In 2005, the couple divorced. The ex-wife moved to Pocatello, Idaho. To make the story easier to follow, I’ll refer to the couple as John and Mary and to the child as Adam.

John asked the court to order visitation as part of the divorce proceedings. Visitation of eight hours every two months was ordered by the Court. Mary was to bring the child to Klamath Falls for John’s visits with Adam. Mary complied with the order and brought Adam in July of 2006 but not for the visit in September, claiming her schedule didn’t allow it.

John was ordered to move to North Carolina shortly thereafter. In July of 2007, Mary petitioned the courts to terminate John’s parental rights, alleging abandonment. The case was delayed because John was serving in Iraq in 2007 – 08.

Soon thereafter, Mary remarried. When John returned from Iraq, he requested visitation. Mary countered by petitioning the court to suspend his court-ordered visitation schedule, alleging no contact for four years. Then Mary petitioned the Court to have John’s parental rights terminated for abandonment. The request to terminate John’s parental rights included a petition for Mary’s new husband, Derrick, to adopt Adam.

During the four years in question, John:

State laws regarding abandonment vary. Different states will define abandonment differently. If your children live where it is difficult for you to see them, you should learn what the definition of abandonment is in the state where your children reside.

In Idaho where Adam lived, it must be proven by clear and convincing evidence which means the evidence makes it highly probable or certain to a reasonable person.

Idaho Code section 16-2002(5), states that abandonment occurs when “the parent has willfully failed to maintain a normal parental relationship including, but not limited to, reasonable support or regular personal contact.” Specifically, the statute in Idaho requires clear and convincing evidence of the following:

It is in the best interests of the child to terminate those rights, and

In this case, the lower court terminated John’s parental rights even though he paid over ¼ of his salary in child support and lived 2,500 miles away from his child as the result of orders from the Marine Corps and his service in Iraq while he was in the military.

The Appeals Court also noted that cards and letters can count toward establishing a relationship with the child but sending them to a child who is very young lessens their meaning. Telephone calls between a parent and a very young child also lessen the meaning of the contact.

Strategies for Protecting Your Parental Rights while in the Military

The first step is to understand the law where your child lives. If it isn’t clear to you how the law would be interpreted, spend an hour with a family law attorney who can advise you. An ounce of prevention is worth a pound of cure.

Once you understand how the State where your child resides defines abandonment, take steps to demonstrate that you have a relationship with the child.

The first step is to get a journal for the explicit purpose of documenting contact with your child, including attempted contact.

While you are in North Carolina, you are benefited by the one-party permission for wiretapping law. This means that you can record conversations between you and your ex-spouse. Admissibility in the State where your child resides may vary so check that state’s law about wiretapping as well. Your Family Law attorney can advise you on this as well.

When you call your child’s residence, if it is legal in both places, record the call. Routinely ask to speak to your child.

If wiretapping with one-party permission is not legal where your child resides, it won’t do you any good if you have to defend against a child abandonment claim.

In the Journal, write the date and time of the call. Notate that you:

If you use Skype or other audio-visual methods of visiting with your child, document every visit in your journal. You can create a code and a key to make it easy to document your communication in just a few seconds. Date, length of contact, and method (i.e. Skype, FaceTime, or WhatsApp) are the most important factors.

Consider requesting alternate visitation arrangements. When the court order for John’s visitation was granted, he lived in Klamath Falls, Oregon, which was 650 miles away from Pocatello, Idaho. A healthy adult can drive the distance in one day in good weather. When he received orders that relocated him to North Carolina, he was 2,500 miles away. An 8-hour visitation length no longer made sense.

A request for longer visitation would have opened up possibilities that did not exist with an 8-hour visitation. For example, unaccompanied minors can fly when they are as young as age 5.

8 – 12 years old on non-stop or direct flights, and connecting flights through a number of cities including Charlotte, North Carolina.

Another alternative that opens up when visitation is longer is the option to meet at John’s parents’ home, a move that reinforces additional relationships with the parental side of the family.

If you face financial difficulties, periodically document the financial situation that is causing your inability to visit. It’s easier to remember the specifics, such as when you had to put a new transmission in your car when you document it when it happens. Keep the receipts to demonstrate what took the income the court may think you could have used to visit.

As the child gets older, write notes in the card. When the child is old enough to read well enough, write letters and tuck them in the card with a few dollars. Discount “dollar” stores often have greeting cards priced at two for a dollar or a pack of six for $1.00. If you know you’re going to be deployed, buy an extra one for each holiday and leave the signed, stamped cards with someone who will drop them in the mail at the appropriate times or, if you have the ability to mail them from overseas, that’s a better option. If you’re artistic, draw pictures in the card. If you’re not artistic, stickers on the envelope are usually a hit. They also help the child recognize mail from you and thwart attempts by a custodial parent to withhold the cards.

My children grew up with a couple of distant relatives sending cards on every minor holiday. Despite living thousands of miles away and years between visits, they developed tender feelings. Children know they are being thought of and that matters. Remember to keep copies because sending a card or gift is not a guarantee that the child will ever see it. Once they are old enough, you can ask, “Did you get my card?” If you repeatedly hear, “No,” it is a sign that the custodial parent is interfering with your relationship.

If you have a relative in the area that has contact with your child, send the cards to them to deliver to the child. Contact the school to see if you can send the cards through the school. Talk to a Family Law attorney about your options if you find yourself in this situation.

When the child is old enough to have an email, social media account, or cell phone, use those to communicate directly with your child. Keep evidence of these interactions.

Although it wasn’t mentioned in this case, providing your child with current photos of you can help the child feel they know you. When the child is too young for email or social media, send printed photographs periodically. A framed photo of you once a year or so, or just a new picture for a frame you already provided, can help your child feel your presence in his or her life.

Ask the custodial parent to send you photos. With digital pictures and the ability to text or email photos, there is no cost and very little time involved. Mentioning the event depicted in photo’s you receive when you talk to your child helps the child know you are aware of events in their life.

If you know before the Court decides the custody arrangements that you may have to live far away from your child or be separated due to a deployment, ask the court to make providing photos a requirement the custodial parent has to comply with as part of the agreement.

You can serve your country and protect your parental rights. If the custodial parent interferes with your relationship with your child, you do have remedies. Talk with a Family Law attorney. It may not be necessary to go back to court—sometimes a warning is sufficient to change the behavior. Most divorce decrees prohibit manipulation by or coercive behaviors that involve the child in a dispute between the parents, or a parent disparaging the other in front of the child. The Court may also order that each parent encourage the continuing parent-child relationship between the child and the other parent.